William Freeman Nott was a councillor for North Ward on Camberwell Council and a prominent resident of Balwyn. He served in several commercial and community capacities before his death in 1921. 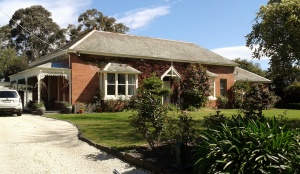 The Sevenoaks Farmhouse, where Nott lived when a resident of Melbourne.

William Nott was born in Gawler, South Australia, and emigrated to Melbourne after beginning a successful accounting career at the Commercial Bank of South Australia. He purchased the Sevenoaks Farmhouse in 1906 and applied for a permit to house a piggery. Despite 26 objections, 10 of which were later withdrawn, the council granted him the permit and the farm was able to operate.[4] The piggery was later converted to dairy.[5]

His new employer in Melbourne, the Colonial Bank on Collins Street in Melbourne's Central Business District, soon promoted him to senior roles within the organisation. He eventually attained the position of Chief Inspector of Branches, a position that earned him respect within the banking community. He eventually retired for "private reasons".[2]

As a respected member of the local community, he became president of the Balwyn Progress Association. In 1911, he was appointed as secretary of the Gippsland Co-operative Curing Company Limited to assist them in constructing a new business in Dandenong.[6] He was also secretary of the Melbourne Chamber of Commerce for many years.[2]

He and his wife, Jessie Nott, were well-known for being involved in charitable activities throughout Melbourne and his home state of South Australia.[2] Some particularly notable activities included fundraising for the Royal Women’s Hospital and other medical facilities. Events included entertainment nights at Her Majesty's Theatre in the centre of the city, often provided free of charge for the charitable causes..[7][8]

Nott first ran for election in the North Ward of Camberwell City Council in 1913 after being pressured to run by several influential local residents.[9] He was narrowly defeated by the incumbent long-serving councillor John Butler Maling. When Maling announced his retirement at the subsequent election in 1916, Nott was one of two candidates who nominated to fill the vacancy. He defeated the only other candidate, James Sneddon JP, by a landslide of 461 votes. His success was primarily due to polling heavily in his favour in the Deepdene and Balwyn polling booths near his residence in present-day Sevenoaks Street[3]

He was an early supporter of the proposal from the Balwyn Progress Association to create an additional ward in the City of Camberwell by splitting North Ward into two and increasing the number of councillors from nine to twelve. While his motion at a council meeting in July 1919 was disallowed, the proposal was adopted in 1934.[10]

Nott was also the chair of the committee that erected a memorial in present-day Beckett Park to the 148 residents of Balwyn, Balwyn North and Deepdene who served in the First World War.[11]

William Nott did not contest the following election and was succeeded by Albert Hocking.[12]

After his death, Jessie Nott determined to sell the Sevenoaks Farmhouse and move to a new home on Narrack Road in the eastern end of Balwyn. The subsequent subdivision created new swathes of residential development and several new streets that are now named Freeman Street and Nott Street in his memory.

The war memorial erected by Nott stands to this day in Beckett Park.