Beckett Park is a large hilltop park in the residential area of Balwyn. It is one of Boroondara's largest and most significant areas of green open space and features native gardens, a playground and war memorial.[2] The Maranoa Gardens are located directly adjacent to the Park and can be access through a gate from the western carpark.

The Park sat as open grassland and bush during the early years of European settlement. It became known as 'One Tree Hill' as Balwyn gradually expanded in size and population. In July 1916, the Balwyn Progress Association presented a proposal to Camberwell Council to establish a park in this location, urging them to acquire land before residential development encroached onto the site.[3] The proposal was warmly received by councillors at the Council meeting on 12 June 1916, with many present making observations about its pleasant nature and panoramic views. Cr John Maling remarked that people "could get on the top of that hill and so get nearer to heaven".[3]

The Reserves Committee of Camberwell Council were instructed to manage the establishment of the park. As they began this process and purchased land for this purpose in 1917, the long-serving and well-respected councillor and former mayor, Robert Beckett, died on 2 June of that year. Despite the protests of the Association,[4][5][6], Council resolved to name the park after Cr Beckett in recognition of his role in establishing the park and for his significant and positive contributions to the community during his life. The Association's efforts to name it 'Soldiers' Park' appear to have been met with universally negative reactions from both the press and political leaders, with the Hawthorn, Kew and Camberwell Citizen calling the suggestion "unkind and unworthy".[5] Soon afterwards, a committee of management was established with three councillors from the North Ward and three members of the Balwyn Progress Association as members.[7] 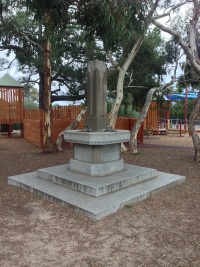 The heritage Gilpin drinking fountain located next to the playground in Beckett Park, built in 1937.

Beckett Park is located at the highest elevation in the suburb of Balwyn. The observation tower and playground sit on top of the hill. There are sections of sparse woodland and a fenced area of remnant grassland and vegetation in the north-east corner of the park. Several native and introduced tree species are located around the park with Maranoa Gardens located directly west of the Park.