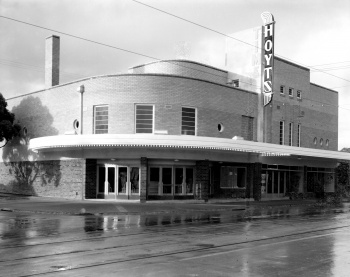 The Time Theatre looking north-east from the present-day site of the Balwyn Library on Whitehorse Road.

The Time Theatre was a cinema located on Whitehorse Road in Balwyn, at the intersection with Iramoo Street. It closed in 1963 and was demolished to make way for a petrol station.

Cowper, Murphy &​ Appleford were the architects of the art deco building, which was officially opened by the Mayor of Camberwell City Council, Cr Arthur Vine on 13 June 1941. The proceeds made from its premerie, a preview of the musical film Down Argentine Way, went towards the Red Cross and Comforts Fund to aid the war effort for the Second World War.[1]

The Theatre opened as one of many in the Hoyt's cinema chain.

During a movie screening at around 10:30pm on 3 May 1945, a fire started behind the screen curtain near the boiler house that provided heating for the building. Patrons and staff were safely evacuated, but the rear sections of the cinema were badly damaged.[2][3]

The next day, Hoyts had planned to erect a temporary screen and stage until the damage could be permanently repaired.[4]. However, the Minister for Health ordered that the Theatre be closed as Health Department inspectors had deemed the structure to be unsafe.[5] It reopened on 11 May after repairs were effected.[6]

As part of a spate of robberies at suburban theatres at the time, the Time Theatre was broken into and a small sum of money taken.[7] The culprit was later identified as a 16-year old boy from Hawthorn, who was arrested by police later that month on suspicion of this robberty and several other crimes.[8]

Three masked gunmen held up the Time Theatre on the night of 19 September 1953. A theatre attendent was counting the evening's takings and was forced to hand over 36 pounds in cash to the gang while they threatened staff with pistols. With the money taken, they ran to a waiting car on Whitehorse Road and fled westwards. The three men were suspected to have also been involved in other similar robberies around Melbourne at the time.[9][10][11][12] The perpetrators do not appear to have ever been caught.

The site of the former theatre is the Shell petrol station, opposite the Balwyn Library.