The Camberwell Ratepayers' Protection League was a community organisation formed in 1921 in response to proposed municipal rating system changes. These alterations were controversial due to the proposed inclusion of unimproved land.[1]

In a letter written to The Argus in July 1921, A. A. Williams, the honorary secretary of the League at the time, summarised the aims of the League as providing information to the public on the proposed changes to the rating system. As its future activities were to show, its purpose extended to opposing the new rating system and providing a means for residents to question its implementation.[2] In this task, it faced the Reform League and the City of Camberwell as its primary opponents in support of the new rating system.[1]

Its exact date of foundation is unable to be ascertained. However, its first recorded reference is in a letter written to The Argus published on 8 July 1921 by the League's secretary.[2]

The League ran candidates in each of the three retiring councillors:[3]

While all three League candidates initially seemed to have failed to unseat any of the existing councillors, the counts in both North and South Ward were very close; these being majorities of 15 and 34 respectively. After a recount on 12 September, the result in North Ward was changed in favour of Latham who was declared elected with a majority of 20 votes. In South Ward, Willison extended his lead over Williams from 34 to 40 and retained his seat. This left three out of nine councillors opposed to the rating changes.[4]

In early 1922, the League successfully challenged the decision by Camberwell Council to introduce the new rating system by appealing to the Supreme Court.[5] The Court found that Camberwell Council had not followed correct procedures through its process of implementing the scheme. However, it did not prohibit the introduction of such a scheme per se; rather it set out a series of conditions for the Council to satisfy should it wish to implement the new system.[6]

After complying with these conditions, the Council quickly introduced the new rating scheme for a second time in early July. The League organised a petition demanding a new referendum on the issue, signed by over 2,000 residents. The Local Government Act provided that a minimum of 800 signatures was necessary on such a request for it to be effective.[7] 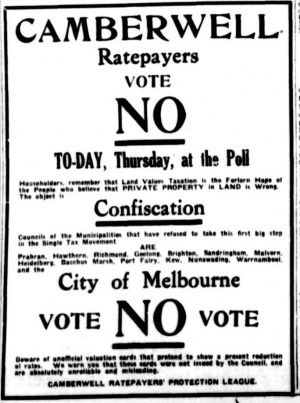 Ads were run by the League urging voters to vote against the 1922 referendum.

The League again became involved in the second council election of the period dominating by the rating issue. A second referendum on the rating issue was also held at the same time in response to the petition organised by the League in July. It ran one candidate, John Howie, against the sitting councillor, Albert Hocking. Hocking had been a proponent of the new rating system and had declared himself in favour during the election campaign.[8] Howie won the election by 45 votes.[9] This left the council with five councillors in favour of the new system and four against.[10]

Once again, the referendum showed a majority of respondents in favour of the new rating system. However, by October, the League had once again challenged the results by alleging electoral irregularities in a letter sent to Camberwell Council.[11][12] Such a threat did not materialise and the new system was adopted by the Council.[13] The League appears to have disbanded following this series of events.

The League was run by a chairman, honorary secretary and defence committee. During times of campaigning at council elections and local referendums of interest to the League, temporary working committees were set up to cover different areas of the city.[14]